Soybean meal (SBM) is widely used at high inclusion rates as protein source in diets for young broiler chickens due to its excellent amino acid profile. However, the high inclusion rates pose a risk to broiler performance as the quality of SBM varies in terms of content of anti-nutritional factors (ANF) and nutrient composition according to several factors such as genotype (Palacios et al., 2004), origin, both within and among different countries, environmental conditions and processing (Grieshop et al., 2003; Thakur and Hurburgh, 2007; García-Rebollar et al., 2016).

We have previously described how the content of ANFs in SBM such as trypsin inhibitors, the indigestible oligosaccharides stachyose and raffinose and the antigen β-conglycinin negatively impact broiler performance (Blanch, 2020ab). Furthermore, the high degree of variability in nutrient composition of SBM makes accurate diet formulation a challenging task as table values do not necessarily represent the raw material used for a specific feed, which may also affect broiler performance (Brown, 2021).

Several strategies exist to ameliorate the consequences of high SBM inclusion in diets on broiler performance. Among these, the supplementation of exogenous proteases in final feed is commonly used as it improves digestibility of protein and amino acids (Olukosi et al., 2015; Stefanello et al., 2016). Another strategy may be to replace part of the SBM by a soy protein product that has been further processed. Enzyme treatment of SBM results in a product of consistently high quality with reduced content of ANFs. Consequently, not only the digestibility of the protein is improved but the intestinal function and health are also improved (Blanch, 2020ab) reducing the challenges posed by high SBM inclusion rates.

In this article, results of an experimental trial with broiler chickens conducted at the University of Georgia and presented at the International Poultry Scientific Forum in 2021 are shown (Rasmussen et al., 2021). In the trial, the use of a further processed soy protein product and the use of exogenous protease were compared. Results highlight the advantage of including a high-quality soy protein ingredient in the starter diets for broiler chickens.

The objective of the trial was to compare the performance of broiler chickens at the market ages day 35, day 42 and day 56 when replacing part of SBM in the starter diet with an enzyme-treated soy protein (ESP; Hamlet Protein A/S, Denmark) or when supplementing diets with an exogenous protease throughout the production cycle. A total of 552 day-of-hatch Yield Plus x Ross 708 male broiler chickens were assigned to two dietary treatments. Both treatments were based on a corn-SBM starter feed (day 0-14). Treatment 1 feed was supplemented with 137.5 U protease/metric ton. In treatment 2, part of SBM in the starter feed was replaced by 5% ESP. In the grower (d14-28), finisher (d28-42) and withdrawal periods (d42-56), all birds received common corn-SBM based diets. However, the treatment 1 group continued to receive protease (137.5 U/metric ton) throughout the entire trial. Content of ANFs in starter diets and performance results (cumulative at day 35, 42 and 56) are shown in Figure 1, 2 and 3, respectively.

Partial replacement of SBM by 5% ESP in starter diets for broiler chickens reduced the content of soy-delivered ANFs by 14%, 11%, 5% and 15% for stachyose, raffinose, trypsin inhibitors and β-conglycinin, respectively (Figure 1). Thus, exogenous proteases added in feed do not affect the content of soybean ANFs such as the indigestible oligosaccharides stachyose and raffinose in the finished feed. It has previously been demonstrated that it is crucial to reduce the content of these oligosaccharides as they have a negative linear effect on the productive performance of chickens (Jiang et al., 2006). These oligosaccharides may also cause wet litter and footpad dermatitis because they exert an osmotic effect in the intestinal lumen, since they are not digested and only partially fermented, resulting in watery digesta and thereby liquid feces as described previously (Blanch, 2020b). A reduction in the content of soybean ANFs is needed to avoid these adverse effects, which can only be done by reducing the SBM inclusion level.

In the present trial, performance results showed no significant difference in body weight gain between the two dietary treatments. However, replacing part of SBM in starter diets by 5% ESP, numerically improved body weight gain until market age by 31 and 51 grams at day 42 or day 56, respectively, compared with the supplementation of exogenous protease throughout the entire production cycle (Figure 2). Furthermore, mortality adjusted FCR of ESP-supplemented birds was significantly improved by 3, 4 and 3 points at day 35, 42 and 56, respectively, compared with protease-supplemented birds (Figure 3a). Likewise, fixed BW adjusted FCR was significantly improved by 2 and 4 points at day 35 and 42, respectively, compared with the exogenous protease (Figure 3b). At day 56, fixed BW adjusted FCR was numerically improved by 4 points by replacing part of SBM by 5% ESP in the starter diet. Thus, replacing part of SBM by 5% ESP in starter diets to broiler chickens results in market age performance better than the performance of broilers fed a diet supplemented with exogenous protease throughout the production cycle. This is attributed to the reduced ANF content in the starter diet by the inclusion of ESP since the negative effects of high SBM inclusion levels are not only due to the digestibility but also the content of ANFs. To overcome these challenges, the ANF levels must be reduced below the tolerance threshold in the finished feed. As shown in Figure 1, this is not done by adding exogenous proteases in the feed, but by including a high-quality protein source low in ANFs in the diet thereby reducing the inclusion level of SBM.

The problem of soybean ANFs is not solved with proteases since it goes beyond the digestibility of the protein. Results show that it is crucial to reduce the content of ANFs, particularly in starter diets. Chicken performance was improved in the entire production cycle in a cost-efficient way by replacing part of SBM by 5% ESP in the starter diet, without increasing the cost of grower and finisher feed, suggesting a carry-over effect. This is not achieved with proteases, but by using clean protein sources of ANFs, like enzyme-treated soy protein. 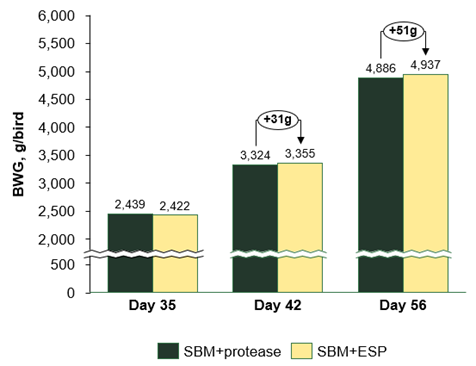 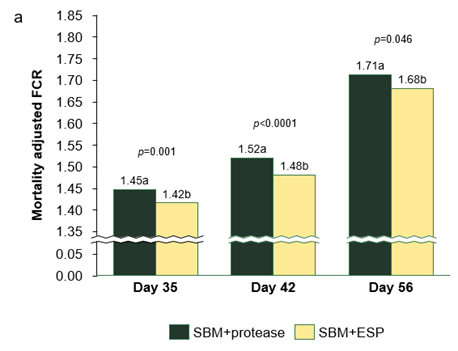 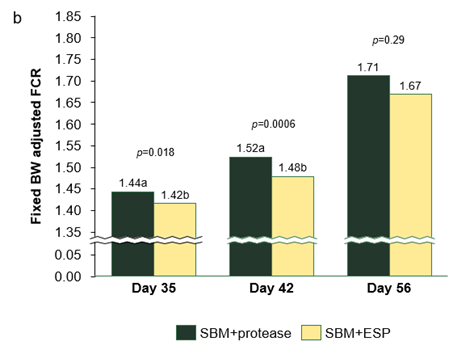 Ask us about it
﻿

Ask us about it